Find ATMs Near You

Over 38,000 fee-free MoneyPass® and Visa® Plus Alliance ATMs. No monthly fees. No minimum balance fees. No overdraft. No deposit required.

Bank with Chime and get unlimited cash withdrawals at over 38,000 fee-free MoneyPass® and Visa® Plus Alliance ATMs, plus over 30,000 cash back locations. You can also locate fee-free ATMs using the ATM Finder in the Chime app whenever you need to find an "ATM near me."

To make sure the transaction you are making is surcharge-free, look for the MoneyPass® or Visa® Plus Alliance logo on a sign at the ATM or displayed on the ATM screen. Learn more about ATM fees here.

While most financial institutions will allow you to use their ATMs for free, most of them charge a fee when you use one that’s out-of-network (not affiliated with the bank)

The big banks offer thousands of free ATM locations, but that availability usually depends on the number of brick and mortar branch locations they have. In fact, there are hundreds of U.S. cities where some of the largest banks haven’t set up shop, or where only a few machines are scattered across town.

With a mobile bank like Chime, you can access over 38,000+ ATM machines without having to worry about fees.

Fees can sometimes add up to be a big problem. Most banks will charge you a fee for using an ATM that is out-of-network. In other words, if you use a machine that is not officially affiliated with your bank you may be charged a fee by the operator and also by your own bank. The best way to avoid fees is to find a bank with a fee-free ATMs and an ATM that is within your bank’s network. Therefore, before choosing a bank, it might be a good idea to check the available locations that belong to that bank.

Many banks offer thousands of fee-free ATM locations, but if you bank with a traditional bank that availability may depend on the number of brick and mortar branch locations. In fact, there are hundreds of cities nationwide where even some of the largest banks have not reached yet, or where only a few machines are scattered across town. Alternatively, mobile bank accounts such as Chime allow you to locate over 38,000+ fee-free ATM machines directly from their mobile app. That’s larger than the fee-free networks at Chase, PNC, Bank of America, CitiBank, or Wells Fargo. Chase with 18,500 and Bank of America with around 16,000 are the only ones that come even close to that number of options. Wells Fargo and PNC have somewhere around 10,000 and CitiBank has a very unenviable position with only 3,300 at its disposal. All of this should be taken into consideration when choosing the best option. 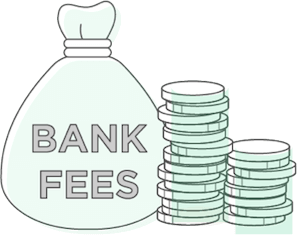 Fees Charged by Other Banks

All banks have different rules concerning fees and requirements and the same thing applies to ATM fees. When it comes to using an out-of-network machine, there may  be an immediate operator fee which can sometimes go as high as $10 per withdrawal. Additional fees can also be charged by your own bank. As for the non-network fees, these charges fluctuate between $2 and $3.50, depending on the bank and the selected account. An international transaction fee also exists which for most banks stands at $5 plus a conversion rate of around 3% of the amount withdrawn.

It is important to mention is that there is often no notification of this fee during transactions. Chase, Bank of America, CitiBank and Wells Fargo charge $2.50 for using an out-of-network ATM, while for PNC it is a little higher at $3. There are certain exceptions where this fee can be waived but it typically requires the account holder to be enrolled in top-tier services that the bank provides.

ATM Fees are on the Rise

Across the nation, the fees for non-network transactions have hit an all-time record and are now 55% higher than in 2008. Since the recession, this fee has been steadily on the rise and it now averages around $4.70 with no signs of stopping. Some metro areas in the U.S. have already exceeded a $5 fee per transaction. Pittsburgh has a fee of approximately $5.19. It is closely followed by New York City at $5.14 for non-network transactions. Washington D.C. and Cleveland both charge about $5.11. Atlanta rounds out the highest fees at $5.04. Additionally, it is speculated that two more cities will soon be joining this list. Phoenix is currently at $4.96 and Denver at $4.92.

On the other hand, there are places with fees below the average. First is Dallas, where a total average out-of-network fee stands at $4.07 which is more than sixty cents lower than the nationwide average. Milwaukee with $4.19 and San Francisco with $4.23 are close behind, followed by Seattle and Cincinnati that both have the fee at $4.30. St. Louis and Chicago are also on the list with fees of $4.41 and $4.44, respectively.

How to Avoid Fees

There are numerous strategies you can employ in order to avoid fees. Use your bank’s app to locate machines that are nearby. Of course, this may only be beneficial if you have chosen a bank with several options in your desired location. You could be in for an unpleasant surprise if your bank only has a limited number of branches or ATM machines in your area.

Withdraw cash less frequently but in higher amounts. This can help you lower the amount that you would have to pay for fees. The negative of this particular technique is that you may find it easier to spend, misplace, or lose the cash you now have in hand.

Some banks do have a way for account holders to waive all ATM fees, including out-of-network fees, but it does come with a price. Upgrading from a standard checking account to a high yield account offers benefits but also brings new monthly service charges. These charges can be avoided only if very strict requirements can be met, and they can also bring a lot of headaches to account holders that choose to do this. Also, this technique does not eliminate operator fees.

Choose the cash back option when paying. Many pharmacies, grocery stores and retailers such as Walmart, Target and Costco also allow you to receive cash back if you are using a debit card, such as Chime, at the time of a purchase without any fees. If you are shopping at any of these stores, it’s a great opportunity to grab extra cash. Not just that, but Chime gives cash back even when paying for some bills, such as cable and phone. Chime also allows you to locate over 30,000+ cash back locations where you can take out cash fee-free with a purchase.

Another strategy to avoid fees may present itself the next time you are out with a group of friends Offer to pay for the group meals or drinks in exchange for cash. You can avoid the fees and be the most popular friend at the table.

Why Choose Chime as your Financial Service Provider?

If you are looking for a checking and savings with no hidden fees, Chime account might be the best option for you. Chime is one of the fastest growing bank accounts in America with over 4 million accounts opened.

Chime has no hidden bank fees. No monthly fees, no minimum balance requirements, and no overdraft. Chime can also save you money even when traveling overseas with no foreign transaction fees that for other traditional banks go up to 3%. Chime does have a $2.50 fee out of network ATM fee, but this can be avoided by using one of their fee-free ATMs. If you consider the 32,000 fee-free options compared to all others previously mentioned and how easy you can locate them using your mobile device you can feel safe and be certain that you will practically never have to pay for this fee.

Applying for an account is free and takes less than 2 minutes with no impact to your credit score.